Carbon sequestration, the process of capturing and long-term storage of atmospheric carbon dioxide is becoming a fundamental pathway due to the slow rate of global GHG emission reductions. There are several natural ways of doing it through biological, chemical and physical processes, several of which can and are being enhanced by CLI. On the other hand, there are also "artificial" processes that have been engineered to produce similar effects, including the large-scale capture and storage industrial processes, a very recent proposal, with several uncertainties, mainly regarding the effectiveness (e.g., leaks) and its high energy demand and consequently costs [1]. One of the most conventional ways of carbon to be stored is to be incorporated into photosynthetic living biomass (cyanobacteria and plants) and then not flowing back into the atmosphere after a full decomposition process after the living organism dies. In the ocean this means that carbon sinks to the bottom and in land it means that soil organic carbon (SOC) increases until it saturates, is trapped in a humid acid environment (Peat bogs) or converted into construction material or biochar (charcoal via pyrolysis). In this section we will focus on the design strategies and techniques implemented by CLIs to regenerate ecosystems, specifically by improving soil structure and quality as well as promoted a high level of biomass, diversity and networking of plants, animals and microorganisms.

Europe is losing soil quantity and quality mainly through erosion and bad management practices with strong consequences on soil depth and composition balance which leads to lower productivity (FAO ITPS, 2015). Also, soil is a major and important element of water and carbon cycles. While most of the soil is present in the oceans and fossil carbon in the lithosphere, it is estimated that soil stores up to three times the organic carbon present in the atmosphere at a depth of 2 m (2413 ± 37 Pg C to a depth of 2 m) (Lal, 2003 in [2]) and nearly four times considering all soil structure.

During the COP21 French authorities launched the "4 per 1000 initiative" which intends to promote a 4‰ annual growth rate of soil carbon stock. This initiative believes that an improvement of land management will enhance the quality of agricultural soils but also carbon sequestration and storage potential. Improvement of soil quality can reduce soil erosion rates (and consequently reduce eutrophication, reduce river clogging and damages to infrastructures), improve surface water quality, etc... nurture water infiltration, ...

In 2018, the Climate Land Ambition and Rights Alliance (CLARA) published a report entitled "Missing Pathways to 1.5°C: The role of the land sector in ambitious climate action - Climate ambition that safeguards land rights, biodiversity and food sovereignty". In this report the authors substantiate and quantify the viable and possible way of decreasing GHG emission but also promote carbon sequestration through ecosystem restoration, mainly by improving land management and agriculture practices at the same time that support local communities and indigenous initiatives, knowledge and wisdom. Within this report there are studies presented (by Stevens et al., 2014) that found that through periods of 13 years (2000 to 2012) deforestation rates in forest managed and owned by the local community in the Amazon region of Colombia and Brazil were three and seven times lower than rates outside, respectively. Another study mentioned in CLARA report (by Blackman and Viet, 2018) also showed that community management reduced both deforestation and forest carbon emissions in Bolivia, Brazil and Colombia over long periods of time.[3]

More than 150 years ago, when mineral fertilisers were not abundant, several communities in different locations did managed to create deep (with more than 2 meters) and high quality soil rich in carbon, phosphorus and other nutrients (up to ten fold) when compared with surrounding and similar ecosystems. These soils are also known by "anthropic soils" and have been sustainably fertile for centuries and millennia, becoming a potential best practise to mitigate climate change at the same time that enables increased crop production. A 2019 article by Kern and colleagues[4] did managed to show, for distinct locations such as Brazil and Germany, that these soils had higher organic matter and nutrients content as well as showed that the stability of total organic carbon (TOC) increased with the black carbon portion of TOC. This black carbon is known to be of anthropic origin, benefiting from rich material (such as food leftovers, bones and/or manure and urine) and long-term chemical and physical processes (such as pyrolysis). The higher the carbon stability the longer the carbon will be stored in the soil without full decomposition. 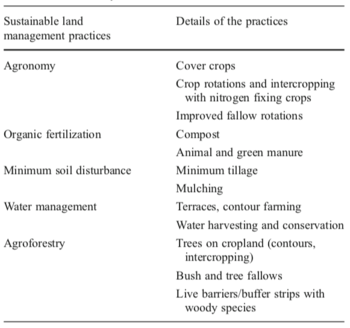 Branca and colleagues found that most sustainable land management practices analysed amongst smallholder farmers generally leads to increased yields, although the magnitude and variability of results varies with climatic conditions and specific practice. The practices with consistently positive yield effects are cover crops, organic fertilizer, mulching, and water harvesting. These sustainable practices tend to store carbon aboveground (such as agroforestry) and others (e.g., organic fertilisation) in deeper soil layer and bind it to stable micro aggregates, protecting it from decomposition, promoting the soil potential to sequester carbon and combat climate change. The same study also highlighted that mitigation potential increases in areas of higher rainfall. In Table 2, Branca and colleagues summarise the practices' mitigation potential.[5] 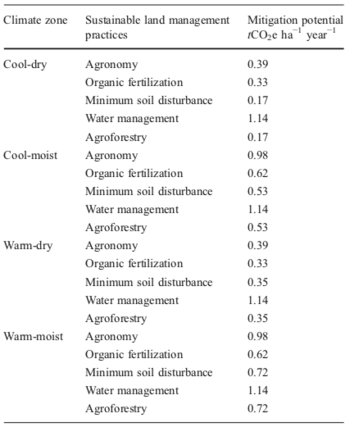 Carbon Sequestration by Ecovillages and Co-Housing

A 2018 meta-analysis from the studies of world's ecovillages done by Barani and colleagues [6] allow us to understand the major strategies used by ecovillages to foster a sustainable living by regenerating the social, ecological, cultural and economic systems. Although most studies were focusing on north hemisphere ecovillages, many of them tend to implement several strategies that reduce impact on the natural system, including its carbon footprint, as well as foster activities that promote carbon sequestration. Some of the monitored activities/indicators measured at ecovillages include: preservation, regeneration and creation of natural habitats; promotion of nature-based and energy-efficient infrastructures; foster less, small and more shared infrastructures and goods; nurture circular economy and short water and food-waste cycles; as well as promote healthy lifestyles and sustainable commuting. All of these are known to be activities that tend to decrease carbon emission as well as increase carbon sequestration, as TESS project managed to show in their research project.

An earlier study (from 2017) reviewed 16 scientific publications that assessed the ecological and carbon footprint of 23 ecovillages and cohousing initiatives. [7] Regarding Carbon Footprint (CF), this study found that in general, ecovillages do tend to have a 35% lower CF than the comparison figures. For example, within Europe, this study highlighted that the CF of Sieben Linden ecovillage in Germany was only 27% of the German footprint.

"3.7 A brief look at Carbon Sequestration 97% of the 29 showcase ecovillages work actively to restore damaged or degraded ecosystems, 63% do it a lot or very much. 90% work actively to sequester carbon in soil and biomass, 37% do it a lot or very much." (GEN 2017:37)"These self-reported activities also help fulfill SDGs 2 - End hunger, achieve food security and improved nutrition and promote sustainable agriculture - and 15 - Protect, restore and promote sustainable use of terrestrial ecosystems, sustainably manage forests, combat desertification, and halt and reverse land degradation and halt biodiversity loss." (GEN 2017:38)"Many of the 100 drawdown solutions are also present, such as: ● Regenerative Agriculture ● Afforestation ● Clean Cookstoves ● Farmland Restoration ● Water Saving ● Composting ● Farmland Irrigation ● Biochar" (GEN 2017:38)

TESS report on the potential of CLI to reduce carbon emission do suggest that further research should investigate the links between CLIs' activities and their members and beneficiaries' individual behaviour. Examining these indirect effects would help to complete the picture of how CBIs influence both society and individuals in terms of sustainability and how to maximise their impacts." [9]