Difference between revisions of "Fearless Cities"

Fearless Cities is the global municipalist movement. It began in 2017 after the first conference in Barcelona to assist all global cities and communities create and / or develop local municipalist projects and political processes to allow citizens have a greater say in what type of city or community they wish to live in. 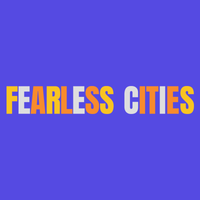 The citizen platform Barcelona en Comú (BeC)[2] won the 2015 Municipal elections in Barcelona.[3] Along with seven other citizen platforms, this movement subsequently got labelled as the 'Rebel Cities' of Spain.[4] The municipalist win saw the city having its first woman mayor Ada Colau (in over 2,000 years of history) and BeC declared they were developing a more 'feminised' democracy.[5] A week after elections when interviewed on Democracy Now! Colau stated: “We can prove there is another way to govern, more inclusive, working together with the people, more than just asking them to vote every four years. We´re very aware that the real change must be global, that one city alone cannot solve all the problems we´re facing”.[6]

In 2017 BeC set up the first Fearless Cities Summit in Barcelona to support other cities who wished to create similar citizen-led change. The conference and new global network had three clear goals:[7]

In 2018 there were four subsequent Fearless Cities Summits around the world and, despite COVID, two more in Europe in 2019.

This International Fearless Cities conference[8] was dedicated to local political movements from Europe and the region. In the organization of the Ne davimo Beograd [9] Initiative (Don’t let Belgrade Drown), this summit gathered activists from over 20 countries who base their political activities on local, life problems of citizens. This conference was possible thanks to European endowment for democracy, Guerrilla foundation[10] and Fund action[11]. Organisers outlined:

At the URBACT City Festival in Lisbon September 2018, Deputy Mayor of the Câmara Municipal de Lisboa, Paula Marques stated: “We need to fight the global system with participatory democracy at the level of cities. Going towards fearless cities is a long way and a long task”[12].

On November 29th 2019, Daniel Cruz[13] from BeC / FC was invited to the international seminar in Lisbon; "(Re)Scaling Networks in Portugal and Europe"[14]. The event was part of "Reclaim Europe!"[15], a project developed by the Friedrich Ebert Foundation[16] in Portugal with multiple local and international partners and happened in Lisbon University Institute of Social Sciences[17] (ICS) research group "Urban Transitions Hub" [18]. Other speakers included Talía Rangil from Local Governments for Sustainability (ICLEI)[19] and Gil Penha-Lopes[20] from ECOLISE[21]. A short video section of the event is available[22].

"Dive Deep and Dream Big: codesigning new transformative pathways through a social learning process" was the full title of the event that happened from 5-9 March 2020. It was organised by the [23], [24] group in Brussels and with support from Municipalities in Transition network. Pedro Macedo[25] writes[26]:

This event happened on November 5th 2020, it's full title was "Municipalize Europe! Transformative municipalities, the corona crisis recovery and the European Green Deal". The event was hosted by The Transnational Institute[27], BeC, Catalunya en Comú[28], Corporate Europe Observatory[29] and the Greens/EFA Group[30] in the European Parliament, made up of Green, Pirate, independent MEPs & MEPs representing stateless nations and minorities.

Municipalize Europe![31] was a unique opportunity to learn about the efforts of transformative cities during the COVID-19 crisis and the solutions that they are putting on the agenda for the social and economic recovery. This one day online event on 5 November was split into four sessions. There was simultaneous translation available in English, French and Spanish.

The event was divided into 4 different sessions: