Let's clean Slovenia in one day. 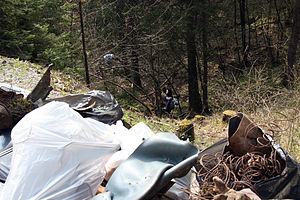 Volunteers cleaning a sinkhole dump near Verd during the event

Let's Clean Slovenia in One Day! (OSVED!) was a Slovenian environmental volunteer project organized by the environmental organization Ecologists Without Borders on 17 April 2010. Its goal was to carry out the largest environmental campaign in the history of Slovenia by uniting 200,000 volunteers to remove at least 20,000 tons of waste in the form of illegal dumpsites, mostly on the perifery of towns and villages, and also the litter in urban areas. The project was inspired by the Estonian campaign Let's Do It 2008.

The first trigger was an email, sent by Nara Petrovič to a circle of his friends are partners on Template:Date=2009-07-21 with the content:

In one day we can clean the world ... together!

...as Estonians have done in 2008. I heard the presentation of their project and got to know two persons who appear in the video (link below). Inspiring, isn't it? Do you think we can do something like this in Slovenia? Together? If you want to know more, look online or write to me. Before you do, of course, check this video: <http://www.youtube.com/watch?v=A5GryIDl0qY>

The project was iniated on 11 August 2009, with an invitation, sent by Aleš Pevc from a news portal Template:Lang-sl (Sunny Positive News)[1].

The first physical meeting, organised by Aleš Pevc and Nara Petrovič, took place on 2 September 2009 and was attended by 16 people. Over a few further meetings with an increasing number of participants, the core team formed, created a project plan, established partnerships and on 12 January 2010 officially launched the project at a press conference, where 17 April 2010 was announced as the national cleanup day.

In the six months before the cleanup, the momentum was built up by various promotional and organisational activities: roundtables, animations in schools and kindergardens, media events with municipal officials, pilot cleanups, interviews, a flashmob, a fashion show etc. [2]

A comprehensive directory of illegal dumpsites was created in collaboration with a Slovenian GIS mapping service Geopedia. 115,000 of dumpsites were registered, containing an estimated Template:Convert of waste.[3]

A large number of national associations, unions and other organisations joined the project. A list of main partners in [4], includes:

Sustainable Development, Eco Vitae and many others,

Around 300 members of the Slovenian Armed Forces participated in three pilot cleanups a week before the main event to sort out logistical planning for the main event.[7][8]

According to official data, there were approximately 105,000 registration from all Slovene municipalities by the closing of registration period on 10 April. The registration was subsequently extended until the event day. The plan was to collect Template:Convert of waste; while wikipedia:hazardous waste and wikipedia:construction waste were not to be picked, but they were indexed in the registry to be collected later by properly equipped proffesionals.[3]

On the day of the event, around 270,000 volunteers, or more than 13% of the Slovenian population participated,[9] making Let's Clean Slovenia in One Day! the largest civic initiative in the history of independent Slovenia[10] and setting the world record.[11] They removed Template:Convert, or 12,000 tons of waste from 7000 landfills.[12] For this achievement, Ecologists Without Borders were awarded the Order of Merit of Slovenia by the president Danilo Türk.[13]

Script error: No such module "Check for unknown parameters".