"With regard to SDG 2 'zero hunger', the area of land under organic agriculture in the EU has steadily increased, and the nitrogen balance on agricultural land has slightly improved. However, other problems related to agricultural production, such as increasing ammonia emissions from agriculture and a considerable decline in farmland bird species, have intensified in the short term. Agricultural factor income per work unit and government support to agricultural R&D have also moved away from the respective objectives." ( 2017:15) 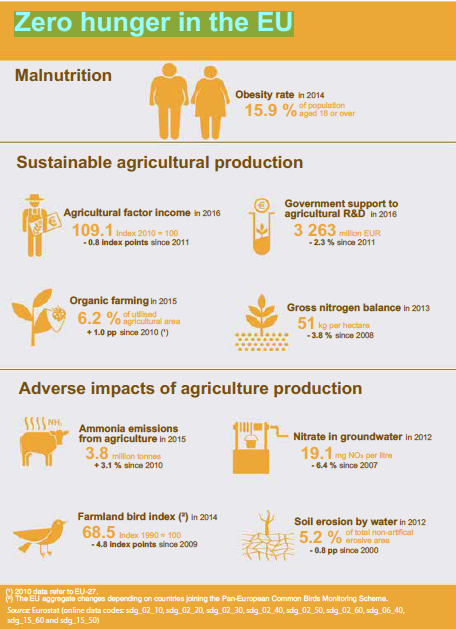 Food sovereignty, together with water and energy, are some of the key sectors that community-led initiatives tackle when deciding to ground effective and long term sustainability and regeneration action at the local level [1]. ECOLISE network members and their initiatives do value the six food dimensions (an essential life enabler, a natural resource, a human right, a cultural determinant, a tradeable good and a public good) considering food as a common and not a commodity.

Local agriculture projects, where production and consumption do occur at local scale, not only increases food availability and diversity of food sources but also makes it possible to maintain and increase knowledge about growing food [2][3]. At the same time it reduces most pollution due to transportation, processing, packaging and preservation as well as promotes local jobs [4]. The Permaculture movement has been probably the one that has been acquiring knowledge and experience on how to nurture “Permanent agriCultures” (original aim) in a way that feeds local community and improves native ecosystems. Listening and understanding how Nature produces such abundant ecosystems is the key stone from which Permaculture grew and developed. Following the 3 Ethics of Earth Care, People Care and Fare Share, it is through the landscape design that the natural elements and resources do favor the implementation of the local initiative or community vision. For example, through the use of the wide diversity of traditional varieties, promotion of perineal cultures (that grow and produce goods and services for several years), use of agroforestry techniques, use of organic fertilizers, promote minimum soil disturbance among others, Permaculture and other sustainable farming and land management systems have been able to increase yields and achieving food security at the local level [5]. The use of these and other techniques (such as working with the topography, terraces and raise beds, and use of legums and other fast growing plants to mulch the soil) do also tend do decrease soil erosion [6][7] as well as nitrate and other elements in groundwater, at the same time that increase biodiversity indexes [8]. Community gardens are also knows to improve participants nutrition (Lovell, 2010; Wakefield et al., 2007 in 2) and have a strong educational value when placed in public spaces such as schools (Guitart et al., 2012; Heim et al., 2009 in 2)

Permaculture has been also inspiring and permeating into Ecovillages and Transition initiatives and both these movements have also been developing ways of growing food locally in ways that respect both the environment and the community of consumers8 Lovell, 2010 in 2,9. For example, Transition initiatives that are found in urban and peri-urban territories have been promoting the emergence of urban farming projects. Grounded on the vision and techniques of Permaculture and having the notion that using urban spaces and infrastructures (such as roof tops and walls) to grow crops could produce a significant amount of food needed to feed a highly densely populated western city (Grewal et al 2012 in 10). However, common barriers found by local initiatives include inaccessible ground and soil quality (contamination) 10. Lack of farming skills is usually solved by promoting dedicated courses such as the Permaculture Design Course. The strong interest by urban citizens makes this niche movement with great potential to promote a new food organizational and industrial ecosystem potentially becoming a pivotal driver of sustainable urban development. At the same time, these initiatives have been promoting also the urban-rural connection by developing Community Supported Agriculture schemes that allows consumers to subscribe to the harvest of a certain farm or groups of farms 11. Very often this service is answering to an existing market gap, of food products that are produced locally, without the use of pesticides and inorganic fertilizers and contributing to a fair payment to all involved in the food production (ref). Also, in crisis situation, such as happened in Greece during the austerity imposed period, it was found that nearly 50 food grassroots co-ops emerged throughout the country and served nearly 22% of the country population 12. In some provinces (such as Piere), nearly 80% of local households were served through these initiatives 12.

These grassroots initiatives have inspired and supported the creation of urban food system strategies, a relatively new tool in local policymaking in the Global North. These strategies are known to have the potential to strengthen the implementation of the SDGs in a synergistic way, responding directly to the achievement of SDG2 but also all other SDGs 11. At the same time, these strategies also pose some tensions and challenges for an integrated implementation of the SDGs: “How, for instance, to reconcile the impetus for re-regionalizing the urban foodshed of Global North cities with SDGs advocating for more equitable global trade, whereby poor countries increase their exports to developed countries? How to marry localism ideologies, underscoring the social, economic, and ecological benefits of locally-sourced produce with goals of global justice and economic solidarity? These are ethical and political dilemmas which ought to be assiduously addressed in the multi-stakeholder spaces and partnerships which SDG 17 calls for." (Ilieva 2017:27)

Also, as pointed out by some researchers 13, it would be good to include access to high quality food as a human right as well as integrate food sovereigthy and security within the 17 SDGs.

12. Rakopoulos, T. The crisis seen from below, within, and against: from solidarity economy to food distribution cooperatives in Greece. Dialect. Anthropol. 38, 189–207 (2014).