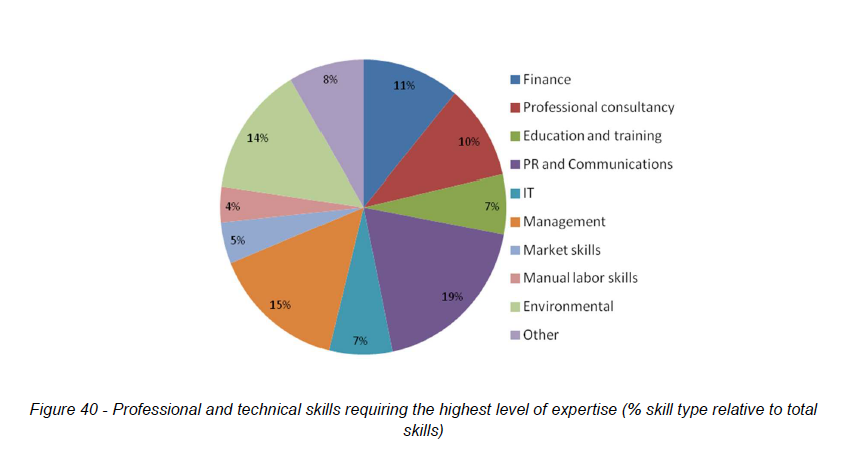 In Figure 41, we break down the number of CBIs with each skill: more than half of CBIs list PR and communications skills within their ‘top three12’ skills (in terms of professional or technical expertise needed). Approximately one-third of CBIs list management and administrative or consultancy skills. Few CBIs consider manual labour (8) and commercial skills (10) among the skills requiring the highest expertise. [2]

"Ecovillages show how governance transformations can start with socializing young individuals into alternative ways of living together, including specific approaches to decision-making such as nonviolent communication, consensus and joint values seeking." [3]

"The research also explored the CBIs’ ability to promote social capital, by eliciting various forms of social investment from their members and seek out the development or strengthening of interpersonal relationships within their communities." [4]

"In fact, PATHWAYS's findings imply that initiatives that include a social cause may actually strengthen or introduce other, especially environmental, goals. In such initiatives participants support the social cause, generating beneficial environmental impact as an emergent side-effect." [5]

(bad copy) "Negative visual Those impacts may also, in the medium term, generate negative spillovers. cts on local retailers, etc. may be among the negative indirect impacts of CBIs on the local economy. Some authors have documented that some kinds of initiatives can promote new forms of enclosure and (ecological) gentrification (Dooling 2009; Tornaghi 2014), by increasing the value and attractiveness of undeveloped inner-city areas which, as the extensive literature about gentrification shows, may negatively affect low-income residents mostly because of increasing housing values or cost of services. There may be additional negative, although not strictly economic, indirect effects: bike sharing, for example, may increase insecurity due to an increase in road accidents (Sælensminde 2004); other initiatives may expose participants to environmental risks such as exposure to pollutants (Koc 1999: 99), but those cases are very rare." [2]

(Other possibilities listed in first draft: Innovation (including technological, economic and financial innovation), capacity of initiatives to emerge and to persist, if or how initiatives scale up or replicate (including number of spinoff and/or follow-up initiatives, new audiences captured, new spaces created))

4. Innovation The analysed CBIs demonstrate to be innovative by offering to their users new goods and services and see them as responding to local communities’ needs. Among others, new goods and services mentioned are: new and sustainable materials to generate heat, new solutions for purchasing sustainable energy, innovative ways to ensure the access to local, organic and sustainable food, to manage its distribution, alternative ways to money for exchanging goods as well as new sustainable transport solutions and local infrastructures.The share of initiatives whose activities aimed at creating or diffusing innovation is consistently high in the UK (Scotland), Finland and Germany (between 80 and 90%). On the opposite side is Italy, where only 27% of initiatives consider the issue relevant, followed by Romania (42.0%) and Spain (64%). When it comes to ‘social innovation’ the situation changes: we asked about the importance of “promoting new/different/more sustainable behaviours, life styles and social practices”, only five initiatives (8.0%) answered negatively. Only 1 of 51 initiatives that answered to questions related to their innovativeness registered a patent (in Italy, for a textile fabric made of plastic). In contrast to this perspective, 4 initiatives underlined that they consider patents unsuitable for a community-based approach and they refrain from this practice, while 2 initiatives answered that they might consider the possibility in the future. [1]

"In line with what was stated in the previous section, 68.0% of initiatives declared a feeling of “pressure to change” their functioning and/or products. When asked if they actually created any new goods, services, or market segments, 76.0% of initiatives answered affirmatively. However, once asked to qualify, many of those new products turned out to not be really new, sometimes consisting of merely a new ‘vision’ or attitude towards traditional services, sometimes of innovations borrowed from somewhere else whereby the initiative was simply the first to introduce it in the ‘local area’ without any adaptation. This is not surprising given the difficulty in understanding what is effectively ‘innovative’ or not. After such a verification, we can state that approximately 21.0% of CBIs actually introduced more or less radically new goods or services (“Market formation”), 25.0% introduced innovations created by someone else (“Experimentation”), and 17.0% achieved both at the same time: they were able to create some sort of new market as well as experiment or test innovations produced by others. These results are summarized in Figure 83 together with the distribution of CBIs with respect to their other innovation sub-functions. The categories are described in Table 48." [2] 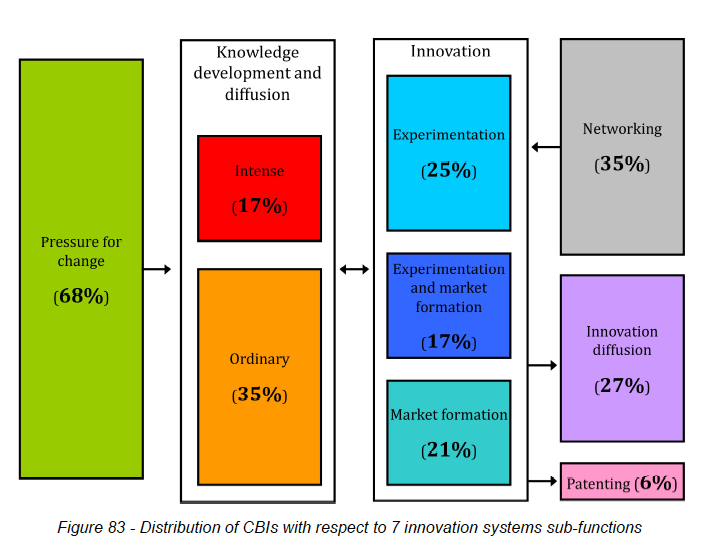