Let's do it! World 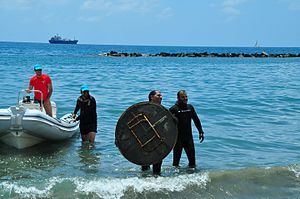 Let's Do It! Mediterranean 2014 action in Cyprus 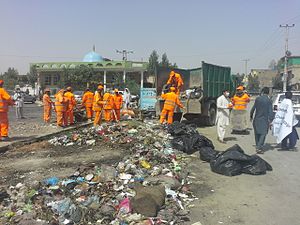 Let's Do It! World is a global civic movement developped around the idea of mobilising large numbers of people for one-day nation-wide cleanups to clean up illegal waste. The model was pioneered in Estonia on {{|date=2008-05-04}} with their nation-wide cleanup called Let's do it! (in Estonian: "Teeme Ära!") engaging Template:Valpeople or 4% of their population, cleaning up Template:Val tons of waste in one day.[1] Over a decade, the movement has spread to practically all countries of the world and mobilised millions of people to participate in cleanups.

The identity of Let's do it! World

In some countries, the campaigns used the original graphic identity and the name, either in English or translated to their own languages, while others have chosen different names and graphic identities and the extent of affiliation with the Estonian Let's do it! World organisation.

Since 2018 a new graphic design was adopted and the global campaign adopted a new name: World Cleanup Day.

For the most time the movement has been spreading by a combination of the targeted efforts of the staff and volunteers from Let's Do It World Foundation in Estonia and mostly scattered efforts by individuals and organisations around the world. Since 2017 these efforts became better concerted.

Until 2018 the movement didn't have an official global franchise or membership, so national organisers were free to decide how to liaise with the initiators from Estonia. This has resulted in a diversity of adaptations of the graphic identity and execution of national campaings around the same core concept of mobilising as many people as possible to pick waste on one day.

In most countries the campaigns were grassroots initiatives, coordinated bottom-up by teams of volunteers, in most cases young urban people concerned about the environment. In some countries, the initiatives have later grown into stable organisations with substantial budgets and employees, repeating the nation-wide cleanup annually and developing various other projects, while in other countries the initiatives fluctuated, sometimes organising the cleanup only once, often on a much smaller scale -- regionally or locally.

Let's do it! World is a highly inclusive movement and it is easy to qualify for membership. While national coordinators are encouraged to organise large cleanups emulating the model of the most successful countries, small local cleanups are just as welocme under the banner of Let's do! World.

From 2018 on, a more global structure has developped with membership and a democratic process held by the global network itself, establishing its own decision making structures. The team in Estonia has split into two parts, one supporting the global network of cleanups under the identity of World Cleanup Day, and the Let's Do It Foundation started focusing on the so called Keep It Clean Plan, based on the principles of circular economy, and embedding Zero Waste practices. [2]

The History of Let's do it! World

From the beginning in 2007, until 2020 the movement has spread from Estonia to over 180 countries and engaged 21 million volunteers.

March to September 2012: The first Let's do it! World Cleanup campaign had motivated some cleanups in 96 countries.

was the first international koference of such sort in a young European country.